I decided the best way to introduce you to the men in Ivy’s life was to give them and their lives to you in grayscale and in biosketch. It’s my attempt to level the playing field and not give you any unfair ideas as to who might end up with Ivy. Especially as in all honesty, she doesn’t know yet. I just tossed them all into the mix, and now they’re all still trying to figure it out. I can tell you this though … I am having fun writing it. And I’m looking forward to you all reading it.

So in this post, I’m going to start with Dan Davies. We’ll kind of do an order of appearance thing, like in the movies. 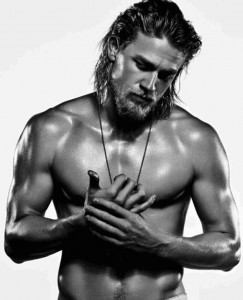 Well, this is the beautiful Charlie Hunnam (thank you for this fabulous picture) … and for all of the pictures of Charlie, this one is perfect for Dan Davies. It’s exactly as I picture him … although admittedly, he’s usually wearing a shirt.

Dan Davies is 34, and he’s been the house manager at Chester’s Hope House for just over 8 years. He started working there a few months before Ivy arrived. He is responsible for the safety and living conditions of the 58 residents living there. The House is underwritten and supported by a legacy grant from Abel Chester (the grandson of the village’s founder). Dan, in cooperation with three elected house regents, ensures that the House is managed in accordance with the grant established bylaws.

I really like Dan. He’s quiet, thoughtful, loves to read, and he has the looks of a good guy gone badass. He rides a black Harley Road King, and this along with his quiet badass looks makes a lot people think he’s all kinds of trouble. But really, he just likes to ride, and he likes it do it on old school thunder. (To me, the quiet, thoughtful, tall, muscular thing just comes off as intriguing and sexy as hell.) When he has the time, he likes to ride along with the Great Lakes Road H.O.G.s. They usually spend the summer doing tours of the lakes. Dan likes the scenery, the food, and the chance to swim in the lakes to wash away the grit of the road and the heat of the summer sun. (The ladies just like to watch him walk out of the water.) 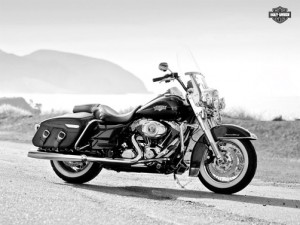 Dan’s bike
(Thank you to Harley-Davidson for such a beautiful pic.)

Dan met Ivy when she moved in during her early days of college. She was so pretty then, and still is now. And she’s a workaholic. Something he can relate to. She is determined to be successful, and he likes that about her. She’s also a well behaved resident, and that makes his job easier, so that’s a bonus.

As part of his compensation for being the house manager at Chester’s Hope House, he is provided an apartment in the house, and he has a private area in the backyard that is for his own use. He hangs his hammock there for quiet reading. 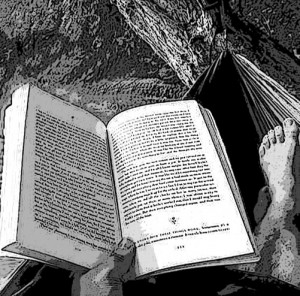 If you look on Dan’s bookshelves, you’ll find books on business, how-to home repair, gardening and landscaping, psychology, leadership, and social dynamics. He also has a varied assortment of history books and a fair number of the classics. And ever since Ivy moved in, he’s been reading up on plays. He has a copy of Sam Shepard: Seven Plays. It’s one of her favorites.

Do you have any questions for Dan or for me? Post them below.

Next post will be about Erik Slater, another hotty who has crossed paths with Ivy. And the hot pool of hopefuls gets bigger.